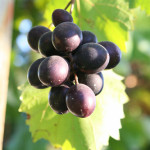 Muscadines (vitis rotundifolia) are native to the Southeastern United States and thrive on the heat and humidity common to the region. Muscadines are known for producing high levels Resveratrol, an antioxidant that blocks the effects of unstable molecules that occur naturally in the human body called free radicals. Free radicals are known to cause cell damage and have been linked to heart disease, stroke, signs of aging, and certain types of cancers and macular degeneration of the eye. For this reason, Muscadine grapes are currently being sought after as a renewable source for Resveratrol and have been deemed nature’s healthiest grape. 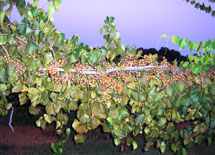 Many varieties of Muscadines grow wild throughout North Carolina from the coastal plain to high Mountain regions. In the wild, Muscadines are typically divided into the three different flowering categories of male, female, and self-fertile. In addition, each of these three categories can be further described by the three basic grape color groups of bronze, black, and red.

One of the most popular varieties of Muscadine is the Scuppernong. The Scuppernong is a female-bronze verity of Muscadine grape named for the Scuppernong River. The Scuppernong was first noticed by Florentine explorer Giovanni de Verrazano in 1524 and by explorers for Sir Walter Raleigh in the 1580’s that sent back reports from the Outer Banks of grape vines that “…covered every shrub and climbed the tops of high cedars. In all the world, a similar abundance was not to be found.” The Roanoke colonists are credited with discovering the “Scuppernong Mother Vine” on Roanoke Island. The “Mother Vine” is now over 400 years old, covers over half an acre and has been known to produce grapes in excess of two inches in diameter on various occasions through history.

The Scuppernong was the first grape ever actively cultivated in the United States and was named the official state fruit of North Carolina in 2001 by The General Assembly. Muscadines are best known for their extraordinary flavor, high sugar content, and unusually thick outer skins. They typically grow to between 1-inch and 1½-inches in diameter in clusters of twenty-to-thirty grapes each. Cultivated Muscadine vines will typically produce between 80 and 120 pounds of fruit per vine, depending on season and variety.

During the harvest of 2016, WoodMill Winery processed 182 Tons of Fruit for our wine production exclusively for WoodMill Wines. 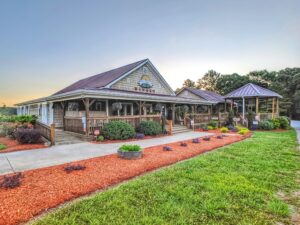 Schedule your event at WoodMill!

We offer the perfect location for: